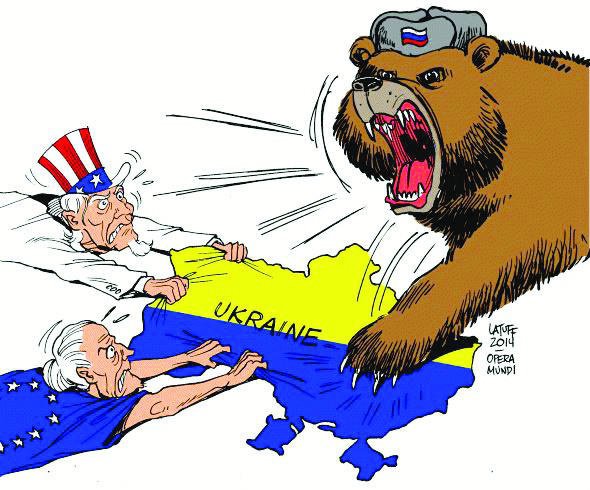 For at least three decades the West has rested on the belief that the process of global democratization was unstoppable and that peace and harmony were guaranteed. It has naively believed that it could control the supply of goods necessary to feed the unbridled growth of its own social and economic well-being. The Ukrainian crisis has shown that Western, and in particular European, well-being is not guaranteed but rather intrinsically dependant on raw materials – or in any case on resources and goods from the rest of the world.

In Europe, even more than in North America, we must urgently rethink how to find the resources necessary to maintain our high level of well-being; we must remember that liberal democracy is not guaranteed and it does not rest on moral assumptions, but rather on a sacrifice to which the present generations are no longer accustomed.

Our well-being, the feeding of our citizens and the functioning of our society, require lots of energy that we buy from abroad through increasingly long and complex global supply chains. A complexity that we are increasingly struggling to control and that determines the price of what we buy.

We have also pursued the ambitious albeit commendable goal of saving the planet from climate change (or, more realistically, mitigating its speed). However, we have not relied on science and common sense to do so, but rather on ideology and pathos, worsening our economic dependency: we continue to buy from abroad all while demanding that our partners abide by strict environmental standards under the threat of exclusion or boycott of raw materials and producers. These demands have a cost that companies and citizens cannot avoid paying.

Unlike Europe, the United States has had the foresight to curb its global dependence on raw materials and has preferred resilience to sustainability. They are the world’s leading producer of the kind of energy that makes the world run, and they don’t fare badly when it comes to energy for domestic use either. They understood before us that dependency must be replaced with flexible and rapid supply chains to avoid bottlenecks and blackmail (i.e. Russian gas).

Moreover, Europe has left the control of its borders and the protection of its partners – such as Ukraine – in the hands of the U.S.: friends but also (potential) suppliers of gas, wheat, and other raw materials. Once again, Washington fails to shine in diplomacy and foreign affairs, as these hours demonstrate.

They provoked Russia by repeatedly inviting Ukraine to join NATO, but now they refuse to defend it with the NATO weapons.

The United States and the European Union are relying on the tightening of economic sanctions, which they already employed since 2014, even though they know that they have effects in the long term, often intangible and frequently more  impactful on the poor people than on the big capitals that control power; but above all, these sanctions also affect the economy of those who issue the sanctions. Thus, we Italians pay the price too.

The West turns out to be weak. It drafts, as did Italian Prime Minister Mario Draghi, an energy plan (but only for gas, forgetting that much more is needed) that should have been presented at least thirty years ago, full of theories and omitting the unintended consequences (of intentional actions), to paraphrase Friedrich von Hayek.

It mentions the use of liquid gas that the U.S. would offer us in salvage (just to stir up the conspiracy theorists who point out that the gas crisis is partly the result of pushing the pro-Western propensity of Ukraine) and the renewables, without a supply chain project, since panels, batteries and blades are made in China. We try to diversify, running away from Russia to take refuge in China, the United States and Qatar. And without a plan for circularity: if the sun is clean, panels and batteries must be dismantled or recycled.

Before deciding on what and where to invest, or rather on whom to depend, it would be appropriate to ask ourselves what we need (so does China). How much energy (food nutrients and for things) do we need? How can we produce it? How can we organize supply chains, even global ones, but environmentally and financially resilient and sustainable?

If we don’t humbly answer these questions, we will continue to stumble around, banging our heads against the next giant. We are small and count for little, but like the old Ulysses, we can still count on our mind, although who know for how long. In order to do so, two conditions are necessary. First: a training of freedoms that inserts in the asphyxiated political debate of the last thirty years, the breath of the realistic liberal method in governing. Second: the market is indispensable in modern society, but the market does not reject the State. Indeed, it is made possible and functional by the State that takes care of creating well-being for its citizens and does not chase their emotional consensus by renouncing its own role.