In 1989 the Berlin Wall fell opening the road the German reunification, the process in 1990 in which East Germany became part of the West Germany, and the Germans became one nation. The end of the unification process is officially referred to as German unity, celebrated each year on 3rd of October.

How did united Germany transform itself from “the sick man of Europe” to an “economic leader” in less than a decade, while also having to deal with the process of reunification? Some evidences show that market capitalism developed in West Germany after the second world war, together with labor protection and a moderate welfare state, has been a key factor and the prove that full socialist models are destined to fail.

Despite this, German reunification has not been easy. It has not come free, and it is not without its challenges.  But seeing the issues happening before the walls came down is important to see what lies ahead.

The webinar will be attended by distinguished experts:

Matthew Edwards is a Director at ViennEast Consulting GmbH. He studied history at the University of York and international security at King’s College, London.

Gunther Schnabl is Professor of Economic Policy at the University of Leipzig.

Clemens Schneider is Director and Co-Founder of Prometheus – Das Freiheitsinstitut. He studied Catholic Theology in Bonn and Munich. He frequently gives lectures and publishes in major German newspapers like FAZ, Die Welt, and taz. 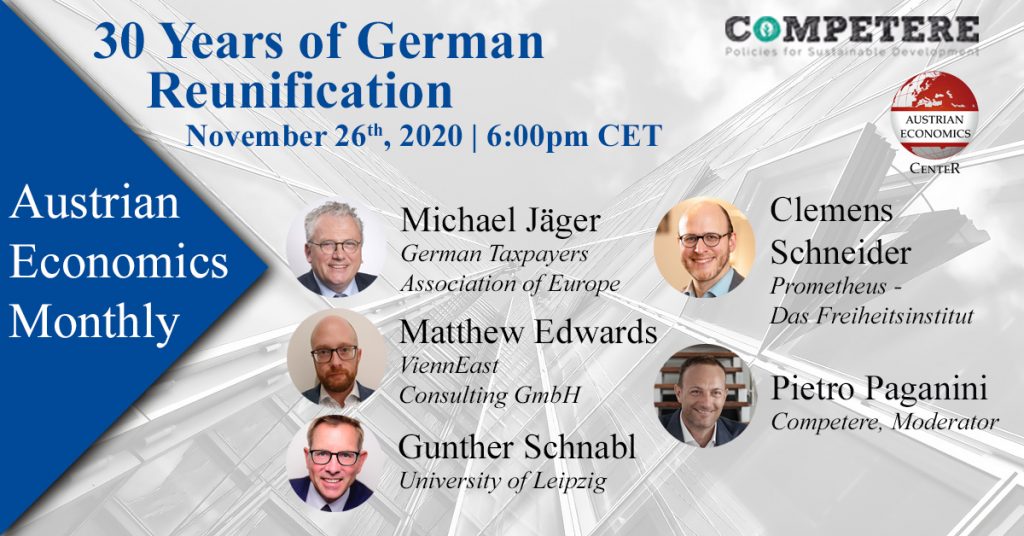 He servers as Director at ViennEast Consulting GmbH. He studied history at the University of York and international security at King’s College, London.

Michael Jaeger is the Secretary General of the European Taxpayers’ movement Taxpayers Association of Europe (TAE) since 1996, and since 2011 also Chief Executive Manager (CEO) of the European Economic Senate, the network of leading corporates in Europe.

Professor for Economic Policy and International Economics at Leipzig University. He earned his Ph.D. at Tübingen University and was a visiting researcher at Bank of Japan, Stanford University, Tokyo University, Catholic University Leuven, Deutsche Bundesbank, Federal Reserve Bank of New York and European Central Bank. His research focus is on exchange rate economics and international monetary systems with a regional focus on Japan, East Asia and Europe.

Clemens is cofounder and managing director of the think tank “Prometheus – Das Freiheitsinstitut” in Germany.