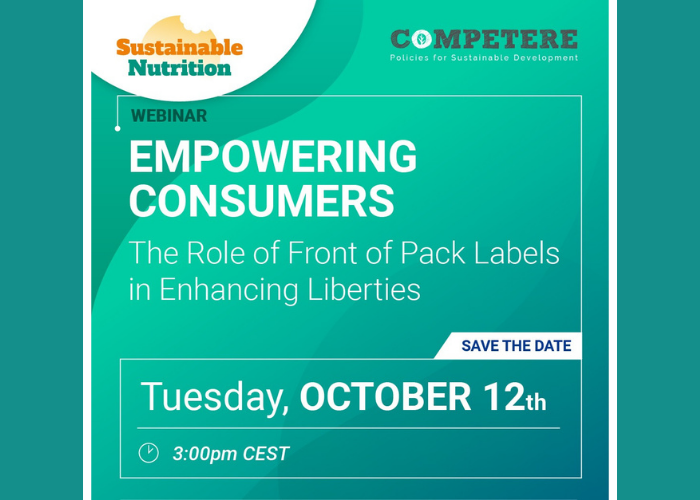 On October 12th 2021, Competere hosted a webinar with Herbert Dorfmann (MEP, Rapporteur on the Farm to Fork Strategy), Alessandra Moretti (MEP, Democratic Party), Jordi Cañas (MEP, Ciudadanos), and Massimiliano Giansanti (Chairman of Confagricoltura). Over the course of the discussion the panelists shared their insights on the Farm to Fork Strategy and on the different labelling schemes that could be introduced by the European Union by the end of 2022, from Nutriscore to Nutrinform Battery.

Scientific evidence, transparent information and freedom of choice for European consumers were the main criteria that the panelists put forward as fundamental to the creation of a harmonized front-of-package label. Concerns regarding the prevention of diet-related diseases and the socio-economic sustainability of healthy products were also raised, while pointing out the need to look beyond domestic consumers to ensure sufficient and accessible food for the underfed areas of the world.

PILLS FROM THE DEBATE

«I am firmly convinced that labelling should not teach, but rather inform about a product. It is the consumer’s prerogative to decide. Any labelling scheme that wants to redirect consumers’ choices or superficially convey information is misleading.»

«Confagricoltura is completely against the Nutriscore system because it penalizes the Mediterranean diet, one of the healthiest in the world according to the scientific community. We will not accept any compromise on front-of-pack labels that we do not consider to be optimal. The system must inform scientifically and fairly, without becoming a commercial instrument. Organizing awareness and information campaign will be fundamental to allow consumers to choose in a way that is truly conscious and not dictated by colors.»

«The European Commission must be dedicated to the development of a transparent European front-of-pack label that allows consumers to receive truthful information, without influencing their choices or discriminating world-class Italian and European products. We must take concrete steps to limit the development of certain front-of-pack nutritional schemes, already used in some European states, that do not allow for a distinction between healthy and harmful foods. Going forward, each European initiative will have to find the fundamental consensus of EU’s scientific community.»

«It is necessary to establish a single harmonized label to help consumers and unite the common market. However, several factors must be considered. How can we create a label that does not discriminate among products? What information do we wish to convey to consumers? While we avoid a paternalistic approach, consumers are the final and true interlocutors. To change their diets and their eating patterns, labels are not sufficient. We need a strategy that involves global chains of agricultural producers and distributors.» 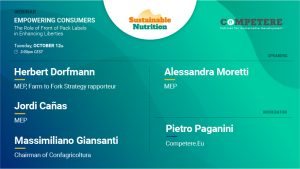 Herbert Dorfmann, MEP Südtiroler Volkspartei, is the Rapporteur on the Farm to Fork Strategy dossier. He is the Vice-Chair of the Delegation to the Euro-Latin American Parliamentary Assembly as well as a member of the Committee on Agriculture and Rural Development and Committee of Inquiry on the Protection of Animals during Transport.

Massimiliano Giansanti is the President of Confagricoltura. He is also the President of Agricola Giansanti srl and CEO of Gruppo Aziende Agricole di Muzio. In September he became Vice-Presidente of the Committee of the European Agricultural Organizations (COPA). Mr. Giansanti works to support agricultural innovation and progress and to promote growth and sustainable development within the sector.