From illicit crops to a prosperous futureROUNDTABLE "FIGHTING ILLICIT CROPS: THE ROLE OF OIL PALM PLANTATIONS IN ENHANCING SOCIAL DEVELOPMENT" 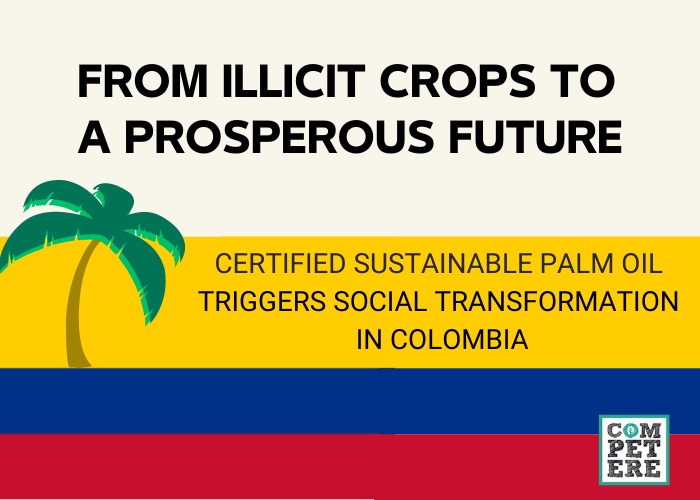 On February 22nd, Competere hosted a roundtable on the role of oil palm plantations in improving social and economic conditions in areas previously affected by cocaine cultivations and narcotraffic. Read below a summary of the debate.

FROM ILLICIT CROPS TO A PROSPEROUS FUTURE:

Rome, February 22, 2022 – A more prosperous future depends – among other things – on certified sustainable palm oil. This is the lesson learnt during the round table “Fighting illicit crops: the role of oil palm plantations in enhancing social development“, hosted by Competere, the European think tank acting to promote policies for sustainable supply chains worldwide.

The speakers have argued that palm oil plantations are an extraordinary means to improve social and economic conditions in areas previously affected by poverty, crime and social unrest, providing a framework of legality.

Impactful testimonies from Colombian farmers who had previously worked in illicit cultivations have confirmed the crucial role played by oil palm plantations. Their first-hand perspective helped understand how palm oil provides an opportunity to escape from narcotraffic and illicit crops, a valuable alternative to a destiny of slavery, harassment and no human dignity.

“I knew my territory had great opportunities but everything was blocked because of illicit traffic. Thanks to the development triggered by palm oil cultivation we can now have hope and we can start seizing the opportunities offered by our lands” – affirmed Diego Alejandro Londoño, born and raised in the Inspectorate of Mapiripán, surrounded by cocaine production and groups of people living outside the law.

“Life in Mapiripan was tremendous, with criminal activities and narcotraffic. Now we have an alternative, we have the opportunity to go to the University, we now have another life to live as free people” – stated Maria Alejandra Tamayo, who spent her childhood in the Inspectorate of Mapiripán too.

Elva Molina, a farmer from Tibu, contributed with a precious testimonies: “Palm oil cultivation has changed my family’s life. Many people started changing illicit crops with palm oil, which is transparent, clean and not dangerous for water sources. Working in a plantation has allowed me to improve my livelihood, we all now have the opportunity to go to University, we have social security and we have learnt a proper job.”

The positive repercussions of certified sustainable palm oil on local social development are clear, triggering a real social transformation. It has been registered that a 1% plantation expansion corresponds to a 14% reduction of cocaine cultivation, with a stark contribution to fighting the illicit economy. More broadly, for a municipality such an expansion would result in a 9.7% growth in local investments, a 2.7% increase in primary education and a 2.1% increase in high school education, a 2% growth in the number of families covered by health insurance and an 8% improvement in water conditions.

Sharon Anderes, Global Communications and Campaigns Lead at Tropical Forest Alliance, stated that “it is possible to grow palm oil in a sustainable manner while contributing to the community, triggering important economic gains. Public and private sectors must collaborate to make it happen.”

From the environmental point of view, oil palm cultivations have a much lower environmental impact and soil consumption than other vegetable oils – 10% of total oil crops compared to 35% of global production – and, thanks to the efforts of the certified sustainable farmers, the rate of deforestation associated with palm oil has dropped dramatically since the early years of the decade, despite a 30% increase in world production during the same period.

“Ideological battles must be stopped. The voices of brave workers we have heard today cannot be left unheard: there is an alternative to underdevelopment, and certified sustainable palm oil is a major driver in this battle for people’s freedom. The positive effects on the local communities must be recognized, pointing the finger against palm oil would risk discouraging the actors that produce in a sustainable way” – affirmed Pietro Paganini, Founder and President of Competere.