What can Monetary Policy do for Economic Recovery? – LIVE TALK

The collaboration with the Austrian Economics continues on issues of major importance for the future of society.

Generally, the Central Banks are charged with promoting the safety, soundness and smooth functioning of the nations’ financial system. In current circumstances, however, their monetary policy and financial stability roles overlap. Some monetary policy strategies have greater potential than others to mitigate pandemic-related financial strains. Which ones are the most suitable to address the current economic crisis?

The webinar will be attended by guests with great expertise on the subject:

John E. Charalambakis is the Chief Economist for the Blacksummit Financial Group Inc., in the United States and teaches economics at the Patterson School of Diplomacy & International Commerce at the University of Kentucky.

Enrico Colombatto is a professor of economics at the University of Turin, where he teaches Foundations of Policymaking, International Economics, and Growth and Development, the director of the International Centre for Economic Research, and the Director of research at IREF (Institut de Recherches Économiques et Fiscales).

Richard W. Rahn is an economist, syndicated columnist, and entrepreneur. Currently he is Chairman of Improbable Success Productions, the Institute for Global Economic Growth, and Metal Convertibility LLC. 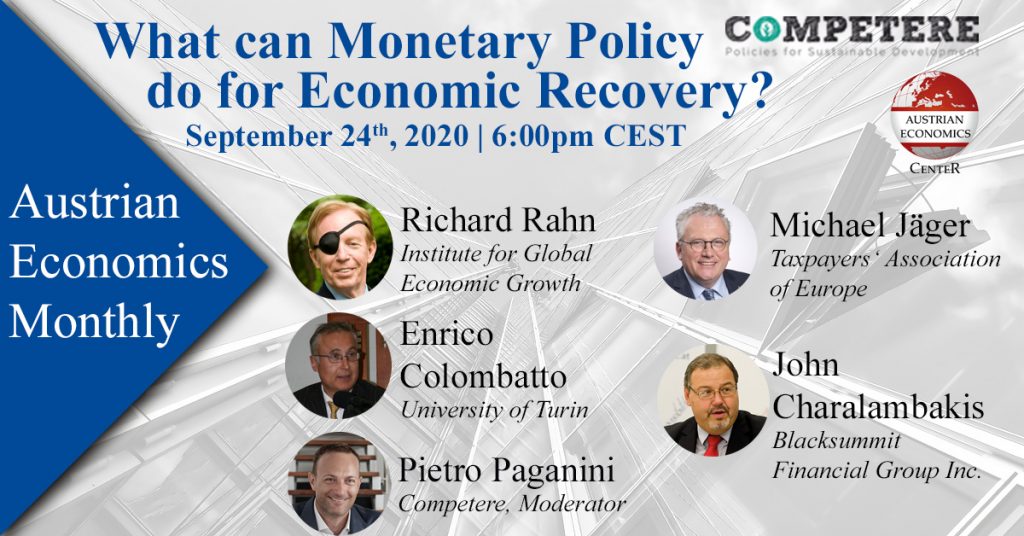 He is the Chief Economist for the Blacksummit Financial Group Inc., in the United States. He has studied economics and finance in Greece, the U.S., and the United Kingdom. He has consulted with numerous organizations, corporations, non-profit groups, as well as government entities in several countries.
Dr. Charalambakis has been teaching economics and finance in the US for the last twenty years. Currently he teaches economics at the Patterson School of Diplomacy & International Commerce at the University of Kentucky. He is the recipient of many awards, the author and editor of three books and of numerous articles, has served on corporate boards, has appeared on economic and financial TV shows, and is a frequent conference and seminar speaker. Recently he assisted the Congressional Financial Crisis Inquiry Commission (FCIC) in their research regarding the causes of the financial crisis. Dr. Charalambakis interests are in the area of international financial markets, forecasting, asset allocation, and the development of viable policies that advanced economic wellbeing among nations.

He is professor of economics at the University of Turin, where he teaches Foundations of Policymaking, International Economics, and Growth and Development. He is the director of one of Italy’s leading research institutes, the International Centre for Economic Research, and the Director of research at IREF (Institut de Recherches Économiques et Fiscales). His present research interests cover the economics of growth and development, law and economics, and Austrian economics. His last book is titled Markets, Morals and Policy Making: A New Defense of Free-Market Economics (Routledge, 2011).

Michael is the Secretary General of the European Taxpayers’ movement Taxpayers Association of Europe (TAE) since 1996, and since 2011 also Chief Executive Manager (CEO) of the European Economic Senate, the network of leading corporates in Europe. Since 1991 Michael Jaeger is working for the Bavarian Taxpayers Association, since October 2015 as a Vice-President. He is an entrepreneur, consultant and author working as a watchdog of the taxpayers and a fighter for less taxation, more individual freedom and free market economy with publications, articles, statements and lectures in matters pertaining to taxation, public spending, agricultural and structural reforms, funds, deregulation, privatization and institutional reforms.

Dr. Rahn was the Vice President and Chief Economist of the Chamber of Commerce of the United States, Executive Vice President and Board member of the National Chamber Foundation, and was the editor-in-chief of the Journal of Economic Growth. Previously, he was the Executive Director of the American Council for Capital Formation. In 1990-1991, he served as the U.S. co-chairman of the Bulgarian Economic Growth and Transition Project. In 1982, President Reagan appointed Dr. Rahn as a member of the Quadrennial Social Security Advisory Council. During the 1988 Presidential campaign, he was an economic advisor to President G.H.W. Bush.

Professor Rahn has taught at Florida State, George Mason, George Washington, and Rutgers Universities, at the Institute of World Politics, and the Polytechnic University of New York, where he was head of the graduate Department of Management.  He also was an instructor for the U.S. Air Force and the Washington economic advisor for the New York Mercantile Exchange.

Dr. Rahn is a member of the Mont Pelerin Society, and is a member of the board of: the American Council for Capital Formation and the Small Business & Entrepreneurship Council and the editorial board of the Cayman Financial Review.  He has served as a senior fellow at the Cato Institute, the Hudson Institute, and the Discovery Institute; as a visiting fellow at the Heritage Foundation; and as a National Executive Director of the Ripon Society.