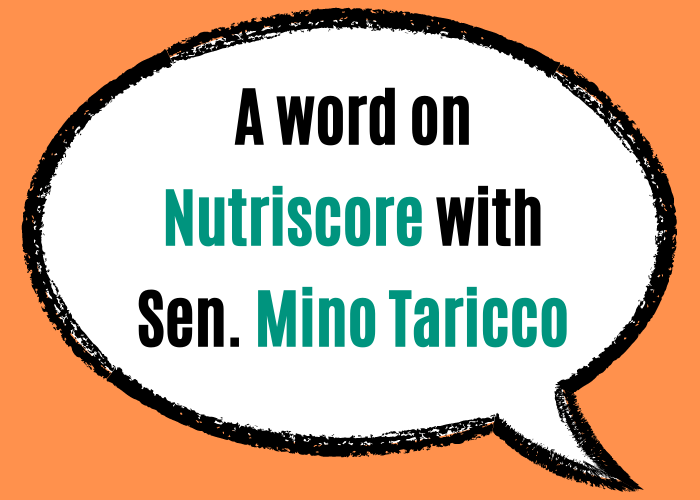 «I can’t help but think that behind such a statement there are specific interests», says Mino Taricco, Senator of the Democratic Party, commenting on the recent stance taken by the WHO in favor of a IARC-led research that supports Nutriscore as a valid instrument in the fight against cancer. «What happened cannot destabilize what our country, along with many others, is doing. The match is a tough one but it is not over: even within international organizations and countries like France there are those who oppose Nutriscore. In fact I don’t understand how a country with a food and wine culture like that of France could consider Nutriscore a system that helps families navigate food communication».

But during the international food exhibition Cibus, held on those same days, some believed Nutriscore’s time was up. What conclusions should we draw?

What we need is meticulous and constant work aimed at building alliances and helping a variety of subjects operating on the fields to come out with their opinions on this.

We know that labelling is an instrument to give consumers the appropriate information on what they buy and put on their tables. Not only Nutriscore, but other kinds of labels too – palm oil free, or sugar free to name a few – have major weaknesses. How do we address these issues?

Nutriscore has a few undeniable advantages when it comes to communication, like its quick interpretation by all citizens. After all, we live in a social and cultural context, that of social media, where information is relegated to a few lines. This plays in Nutriscore’s favor, where the only effort required is the interpretation of its colors. But this sort of communication is misleading, and it does not help consumers to make informed choices in any sense of the word. I will add that a large part of high-quality Italian food production has great stakes in the issue of product authenticity and in providing transparent communication without hiding behind wordplays that mean little to nothing. Saying that a product does not use chemical preservatives does not help in informing the consumer about the quality of that food. In the long run, transparent and authentic communication pays off. DOP and DOC certifications became a credible brand after decades of use, and today they represent the road that enterprises should follow and that institutions should incentivize.

There are still instances of big or small Italian brands being under attack. I am thinking of the accusations against Ferrero, labelled a “monopoly of hazelnuts” that is annihilating biodiversity and agricultural diversification in many Italian regions.

These are things that have the lifespan of about a season. How can we speak of a monopoly when out of the 700 thousand tons of hazelnuts produced globally, Turkey accounts for 420 thousand tons and Italy for 120 thousand tons? I don’t deny that the development of new land investments at the local level may have damaged biodiversity – a problem that could be addressed with better soil management and monitoring techniques – but its exploitation will quickly end. If Italy produced 30-40% of global hazelnuts and that figure increased by 20%, then we would be facing an objective issue in need of monitoring. But we are dealing with infinitesimal numbers on the global scale. Even on a more local scale, such as the Langa area with its high productive levels, I don’t think anybody could speak on an attack on biodiversity. Also because hazelnut plantations often substitute intensive fruit or cereal farms. What can occur in this case is an issue of profitability and opportunity, but that should be addressed by the farmers individually.

Italian Sounding first, then Nutriscore, now these attacks on our production and the recent request by Croatia for its Prošek to be recognized by the European Union: why does it seem like our products have an unprotected flank?

Because we represent the world’s largest share of products protected by Designation of Origin (DO) and other regulations. Anyone who attacks that world attacks us. Our model is based on differentiating our products as the results of centuries-old techniques that are deeply rooted in a geographical area, and as such they are protected by Europe and, to a lesser extent, by the WTO. The attacks on this peculiarity of ours will only increase, as a large of part of the world will want to produce with our same characteristics and profitability. It would actually be strange if it did not generate such an effort by countries that wish to imitate us. More and more so, it’s becoming an issue of European regulations and alliances among those of us in the world who share our same type of work. The bet we’re placing is on the value of everyone’s own authenticity and uniqueness. Without alliances our model, certainly privileged thanks to the efforts of the generations before us, will remain under attack.

In this context, how do you assess the new CAP agreement approved a few days ago by the European Union?

CAP is playing a different game, that of the relationship between social, economic and environmental sustainability and products’ healthiness. But this should be the bare minimum required of all producers, while the battle of official recognition goes far beyond it. A product that is qualitatively superior, produced with centuries-old artisanal expertise, should be protected based on its uniqueness. Recognition is important not just for our producers, but also for those of other countries that wish to safeguard a productive model that we believe to be better.

What could be the role of enterprises and associations in safeguarding and promoting Italian agri-food?

The issue is first and foremost cultural, and secondly economic and normative. The work needed from enterprises and citizens is that of making it known as easily as possible and to as many people at possible what is really at stake. Which is not the recognition in itself but the safeguarding of our products’ history. Not just ours but that of any country that shares our same model. Prošek decided to take a shortcut whereby instead of enhancing its own peculiarities it jumps on our bandwagon. If we want to win this battle we must support local areas and producers in betting on their own products.