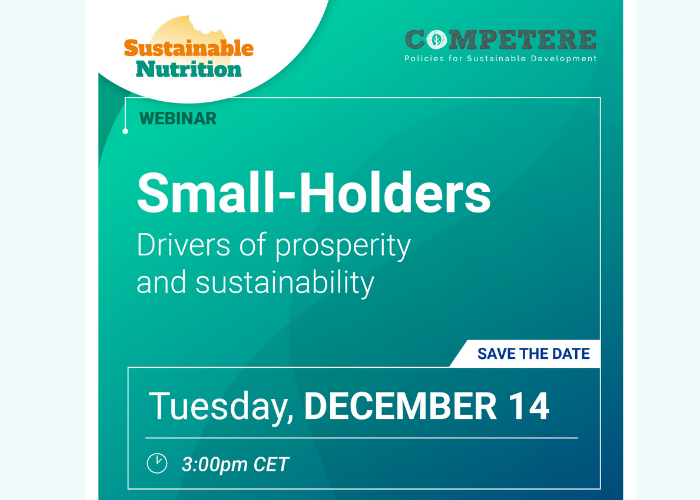 On December 14th, Competere hosted a roundtable with small-holders operating in the oil palm supply chain, the beating heart of global production. Over the course of the conference, several messages emerged: 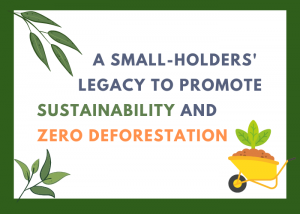 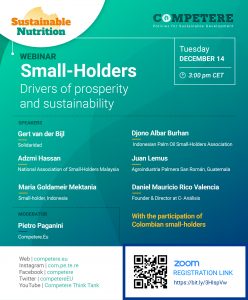 Gert van der Bijl is the Solidaridad EU Policy Advisor. Before joining Solidaridad Gert worked 20 years in Dutch agriculture including in a farmers organization and the ministry of agriculture. From 2009 to 2016 he coordinated Solidadaridad’s work in the soy sector with colleagues in South America, Africa, India and China, including membership of the Executive Board of RTRS. From 2016 onwards he coordinated Solidaridad’s work in beef & leather, including membership of the board of directors of GRSB.

Djono Albar Burhan holds a BA in Information Systemsa and a MA in  International Business. He currently owns and manages his family’s palm oil lands and is part of APKASINDO‘s International Relation and People Development Department. In that capacity, he meets with stakeholders including the Ambassador of European Union for Indonesia to discuss palm oil in Indonesia and for the European Union. He also represents APKASINDO in the Council of Palm Oil Producing Countries (CPOPC) where he recently met with people in Asia Pacific, Africa and Americas sharing how Palm Oil Benefit Indonesia and the Good Agricultural Practices of Palm Oil.

Juan Alberto Lemus Silva is an agrarian engineer specialized in tropical crops. He has a fifteen year experience in oil palm cultivation in Guatemala. He is currently the Agricultural Manager in the Agroindustria Palmera San Román (Palmas del Ixcán), where he is responsible for all agricultural activities including partnership with associated producers.

Maria Goldameir Mektania is a second-generation oil palm smallholder who left a career in Jakarta to join the family palm oil farm in 2019. She is now Head of Communication and Social Media Division at APKASINDO, the Indonesian Palm Oil Smallholder Association. With her years of experience and education in marketing, she has a unique take in recognising the challenges of the oil palm industry.

Daniel Mauricio Rico Valencia has a five-year experience in design, implementation, analysis and evaluation of public policies aimed at fighting criminal economic activity. He has worked as a consultant for Colombia’s top public offices as well as private entities and international organizations. Over the last few years, he has dedicated his work to narcotraffic and asset laundering in Colombia.