THE ECONOMICS OF CHRISTMAS – LIVE TALK

Wolfgang Müller, Executive Director of the Institute for Free Enterprise in Berlin and General Secretary at the European Institute for Climate and Energy in Jena.

Christof T. Zeller-Zellenberg, economist, investor and chairman of the Europa Institut. For 15 years he was Director of PWM REE at Deutsche Bank; today he is involved in private equity and is a sought-after lecturer in the fields of economics and ethics. Zeller-Zellenberg is a member of the kath.net editorial team. 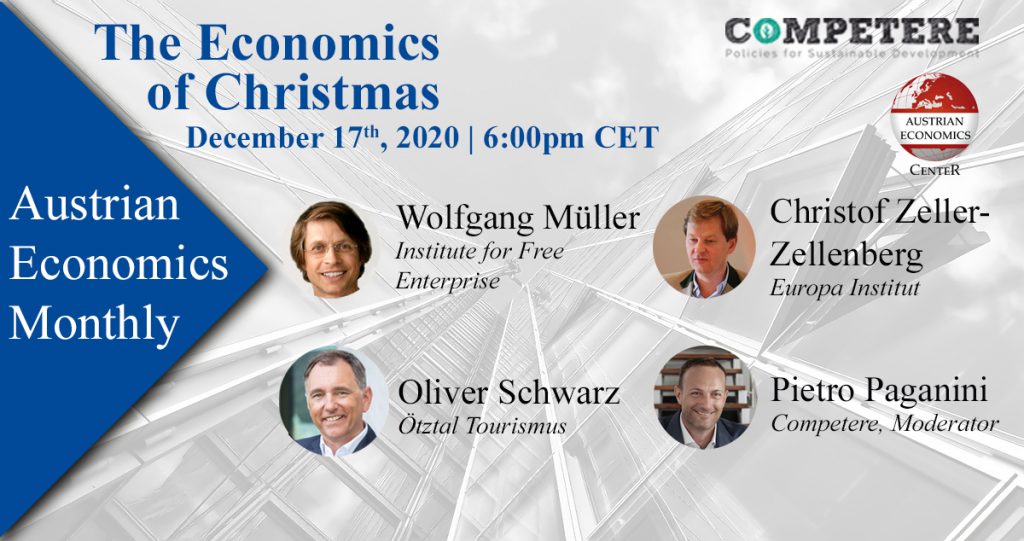 Prior to joining the private think tanks, he worked for the classic liberal Friedrich Naumann Foundation for Freedom in Germany, and abroad as project director in Southern Africa and country representative in Zimbabwe. From 1996 to 1998, he undertook an empirical study in India on the impact of deregulation on Indian SMEs.

Wolfgang Müller studied at the University of Konstanz in Germany and graduated in 1991 with an M.A. in Business Administration/Major: International Relations (Structural Adjustment Programmes in Sub-Saharan Africa). He is member of the Mont Pelerin Society, the Friedrich August von Hayek Society, and serves on the advisory board of the Freedom and Entrepreneurship Foundation in Katowice, Poland.

He is director of the Ötztal Tourismus. Ötztal Tourismus includes a full range of variety and myriad experiences in Tirol’s longest side valley: 6 ski areas, including two glacier ski mountains, more than 350 slope kilometers and prime infrastructures guarantee both variety & absolute snow reliability for your ski vacation in Ötztal.

He serves as President of Europa Institut – a Public Policy Think Tank, located in Austria. He lectures internationally on economics, tax policy, the welfare state, catholic social teaching, christian anthropology – in short anything related to economics and ethics.

Today he is a Private Equity Investor, focussing on new technologies and financial institutions.

He served as Director for Private Wealth Management for Russia and Eastern Europe at Deutsche Bank Austria AG for 15 years and before that as a Project Manager – M&A in CEE for Raiffeisen Investment AG and Procurator at Raiffeisen Investment Ukraine. He was the Federal Chairman of Young European Studentinitiative (JES) and PanEuropa Austria Youth Movement.