The Great Reset and its ConsequencesLIVE TALK 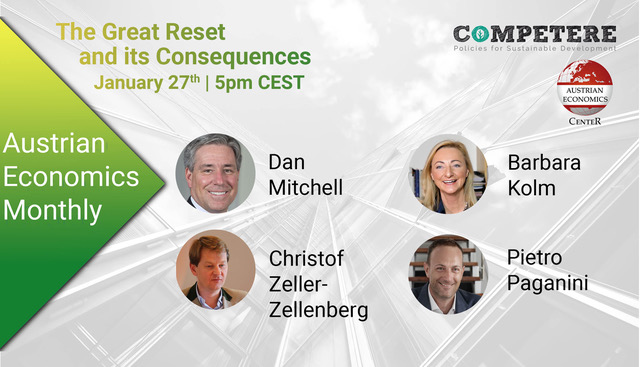 The Great Reset and its Consequences – LIVE STREAMING

Together with excellent guests and experts, we discussed the need for some kind of post-pandemic reset. By now, it is clear that there will be no return to the status quo ante – to the “old normal”. Klaus Schwab and Thierry Malleret outline a concept of “reset” based on their analysis: the pandemic is an opportunity to reinforce the interests of “stakeholders” in capitalism against those of shareholders in profit maximization, i.e. sustainability, environmental protection, and the interests of employees. The goal is to “make the world less divided, less polluting, less destructive, more inclusive, more just, and more equitable” than before the pandemic. The Austrian Economics Center and Competere have analyzed what is happening, trying to give satisfactory answers as to what such a “great reset” could/should look like.

Christof Zeller-Zellenberg, economist, investor and chairman of the Europa Institut

WATCH THE ROUNDTABLE AGAIN HERE OR DIRECTLY IN THE AEM PAGE 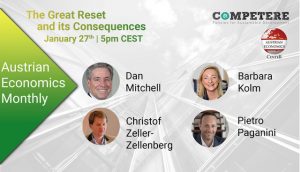 Dan Mitchell is is a public policy economist in Washington, DC. His major research interests include tax reform, international tax competition, and the economic burden of government spending. He is one of the nation’s leading experts on the flat tax and has been the leading international voice in the fight to preserve tax competition, financial privacy, and fiscal sovereignty.

Christof Zeller-Zellenberg is an economist, investor and chairman of the Europa Institut. For 15 years he was Director of PWM REE at Deutsche Bank; today he is involved in private equity and is a sought-after lecturer in the fields of economics and ethics. Zeller-Zellenberg is a member of the kath.net editorial team.