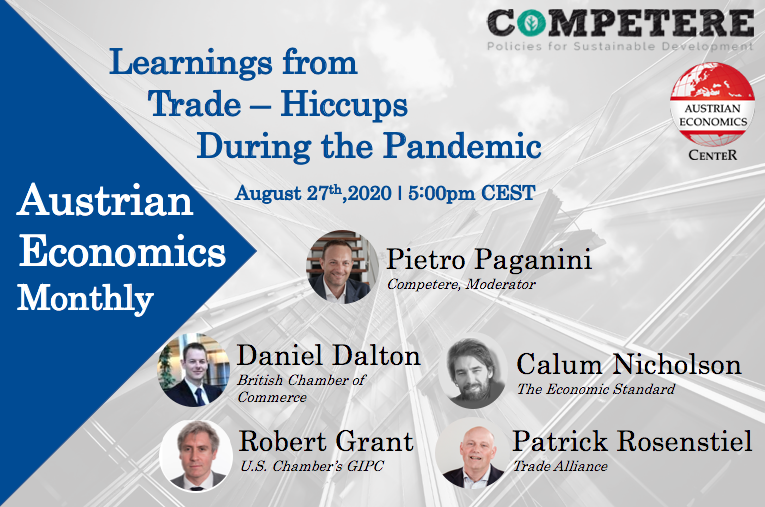 Learnings from Trade – Hiccups during the Pandemic  – LIVE TALK

International trade has played an important role during the ongoing COVID-19 pandemic. As the pandemic has created massive shortages of essential medical equipment, many countries have been resorting to trade policy to maintain adequate supplies. While some countries have adopted export restrictions on essential medical equipment, others have reduced tariffs on these goods. What can we learn from the trade hiccup mostly caused by the pandemy? What is the future of international trade policies?

Robert Grant is the director of international policy at the U.S. Chamber’s Global Innovation Policy Center (GIPC). He is responsible for the Center’s engagement with international governments and the Geneva-based multilateral organizations.

Prior to joining the Chamber, Grant led global government affairs for hotel giant IHG, where he engaged international governments on competition, trade and technology policy issues. He began his career working on policy and political issues for the U.K. government, which culminated in his being posted to the British Embassy in Washington DC. After the embassy, Grant spent time as a public affairs advisor at the U.S. State Department and handled the U.S. and international government relations for Japanese trading firm Mitsubishi Corporation.

He became a member of the European Parliament in January 2015. He played professional cricket for Warwickshire County Cricket Club and subsequently ran his own cricket coaching company before working as an adviser on Agriculture and Trade issues in the European Parliament prior to his election. He was Coordinator for the ECR Group on the Internal Market and Consumer Protection Committee (IMCO), where he has been deeply involved in negotiations on digital single market-related legislation since the DSM was launched in 2015. He is currently serving as CEO of the British Chamber of Commerce Belgium & EU.

Dr Calum Nicholson is a British writer, academic, and UK Correspondent for The Economic Standard.

Thematically, Dr Calum T M Nicholson’s research interests encompass forced migration and migration studies with particular and long-standing reference to the debate on “climate-induced migration”. Philosophically, he is interested in developing heuristics for unpacking the epistemological and ethical assumptions implied in research and policy that hinges on establishing determinative causal claims and distinct labels and categories.

Practically, his thematic and philosophical interests inform a broader concern with the relationship between, on the one hand, research and policy, and on the other, education and democratic politics.

Having cut his teeth in the campaign world, including the Forbes for President campaign, Pat brings nearly two decades of senior level public affairs expertise to the table.

As Executive Director of the Trade Alliance to Promote Prosperity (TAPP), Rosenstiel led a national public affairs, public relations and citizen lobbying effort against the Section 421 (Trade Act of 1974) petition.

As a media relations professional, he has placed his clients in The Washington Post, Fox News, The New York Times, Business 2.0 and The Wall Street Journal, as well as hundreds of regional broadcast, local and trade media relevant to the geo-specific needs of the client.

In addition to his work as the CEO of Ainsley Shea, a Twin Cities-based public affairs firm with a worldwide impact, Rosenstiel presently serves as a senior consultant to the National Popular Vote campaign.