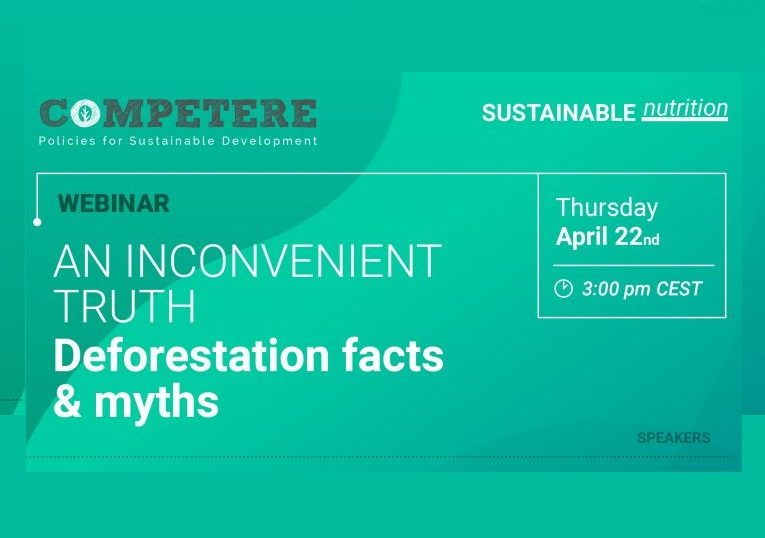 In the occasion of the World Earth Day Competere hosted the trilling webinar An Inconvenient Truth: Deforestation Facts and Myths. More than 150 people attended the exciting discussion on deforestation drivers, data and fact, chaired by our President and curiosity officer, Prof. Pietro Paganini.

You can watch the webinar here

Check out their bios at the end of the page >>>

The European institutions are engaged in multilateral efforts to design legislation that promote sustainability. Farm to Fork and related sustainability strategies will affect the delicate balance between biodiversity and human activities. Industries and market players will be called to review and renew their business models this global challenge. But in order to get it some questions deserve more structural and rational (science based and non ideological) arguments:

As a scientific-based research center, Competere is involved in promoting the international debate to provide a better understanding of the present in order to build a sustainable and innovative future. Last December, we have joined the Tropical Forest Alliance Manifesto calling for an EU policy action to address deforestation and we are highly committed in providing scientific evidences on the state of the emergency to favour wise European policies.

Join this Competere Virtual Conference to discuss which are the main causes and contributors to global deforestation and how to favor effective EU policies discouraging the phenomenon.

PILLS FROM THE DEBATE

Felipe Carazo:“Drivers of progress? South East Asia provides the answer: a combination of actions from private companies, government and civil associations have proved to be effective”.

Daniel Arancibia: “Last year we lost 2.3 mln hectares of primary forests and palm oil is not the evil. Colombia is the 4° producer of palm oil in the world: we need to think about a systemic solution”.

Gaia Taffoni: “Let’s separate data from emotions and understand the responsibilities of the actors. What science can do? Increase advocacy: turn scientific data to concrete and appealing stories”.

Hugo-Maria Schally: “There’s no simple solution. But we have the responsibility to contribute to the solution because we are part of the problem. Europe is a big consumer of a number of products bringing deforestation. Agricultural expansion has been the main driver of deforestation. We are fully committed in bringing the world to reduce it, working on the demand, producing and multilateral sides of this issue”.

Gert van der Bijl: “We need to raise the bar, but also the floor. Europe can help building a financial mechanism, a climate funding to help producing countries not bearing the cost of transforming economic mechanisms alone. There’s a link between deforestation and climate change because of carbon emissions: we need to push forwards positive agendas for smallholders producers, consumers and countries”. 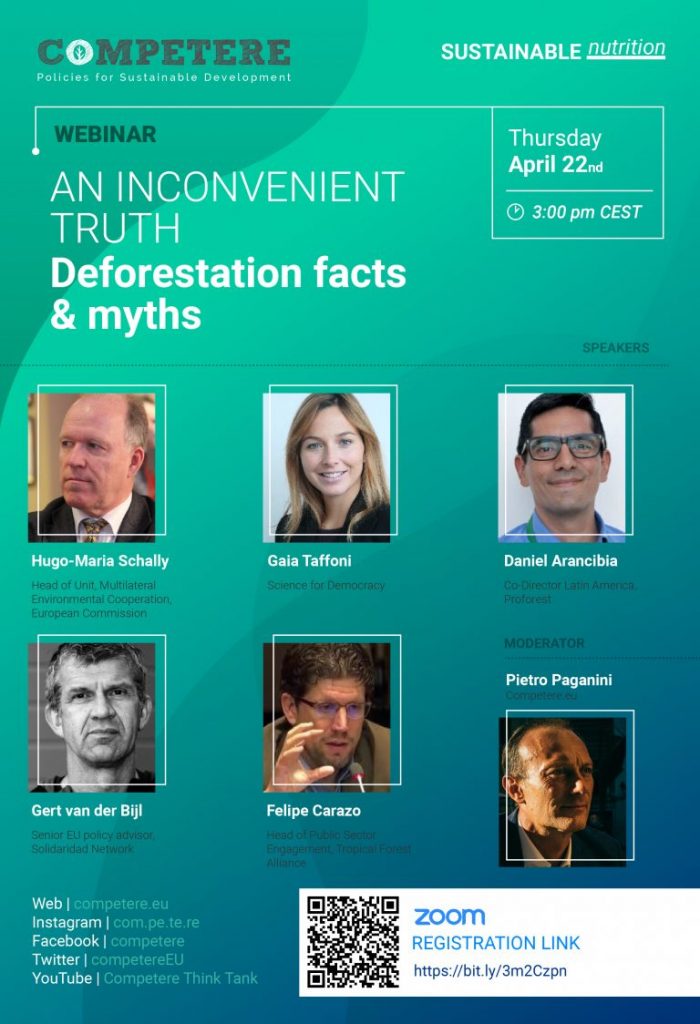 Hugo-Maria Schally joined the European Commission in 1998 and has been Head of Unit in the Directorates General “External relations”, “Development” and “Environment”. He has been involved in the negotiation and implementation of multilateral environmental agreements and major global conferences. He has worked on the interface between environment and trade and has been active in international forest policy discussions since 1992. He has also been leading the EU team in the negotiation of the Nagoya Protocol adopted in 2010. Since January 2019 he has returned to international work in DG Environment focusing on EU collaboration with international organisations and multilateral environmental agreements, the linkage between trade and environment as well as on managing EU policies and legislation regarding deforestation and forest degradation, as well as international trade in wildlife.

Gaia Taffoni is research fellow at the School of Transnational Governance, European University Institute, in Florence, she is a member of Science for Democracy. Gaia is currently working on the ERC Advanced project Protego where she studies regulatory instruments and procedures through which regulations are made and evaluated. Gaia is also adjunct professor at the University of Genova where she teaches public administration.

Daniel Arancibia has over 20 years of international experience in forest-based solutions, social and environmental standards for commodities and landscape approaches to sustainable development. He leads Proforest´s activities in Latin America looking to achieve Proforest’s vision of “sustainable livelihoods in sustainable landscapes” and is member of its Global Executive Directors Group. Before Proforest, Daniel worked at WWF for 10 years, coordinating its forest and market transformation programs for Latin America and the Caribbean, implementing projects in Argentina, Bolivia, Brazil, Chile, Colombia, Mexico, Panama, Paraguay, and Peru. He was also the Forest Stewardship Council (FSC) Regional Representative for Latin America & the Caribbean, opening its FSC Regional Office for LAC in Panama City and working with 12 FSC National Initiatives, developing forest certification standards in 5 countries.

Gert van der Bijl is the Solidaridad EU Policy Advisor. Solidaridad is an international development organization working on supply chain sustainability across the globe, including work in beef, soy, palm oil, cocoa and coffee in Latin America, Africa and Asia. Before joining Solidaridad Gert worked 20 years in Dutch agriculture including in a farmers organization and the ministry of agriculture. From 2009 to 2016 he coordinated Solidadaridad’s work in the soy sector with colleagues in South America, Africa, India and China, including membership of the Executive Board of RTRS. From 2016 onwards he coordinated Solidaridad’s work in beef & leather, including membership of the board of directors of GRSB.

Pietro Paganini is the President and co-founder of Competere – Policies for Sustainable Development – and General Direct at Fondazione Luigi Einaudi, the research center that promotes the study of Liberalism and Liberal thought. He serves as Adjunct Professor at John Cabot University and Temple University of Philadelphia and as Researcher and Visiting Lecturer at Karlstad University (Sweden). He served as Vice President and political officer for the European Liberal Youth. He is the Founder and Board Member of Istituto Italiano per la Privacy (IIP) and the European Privacy Association (EPA).