Over the past few weeks, palm oil and its ability to satisfy European demand following the Russian-Ukrainian war and its impact on the unavailability of sunflower oil have been topics of much debate. In the context of such market dynamics, some environmentalists have come forward with old claims of deforestation along the supply chains that should immediately be debunked: among all vegetable oils used by the agrifood industry, palm oil is the one most often certified sustainable. Ideological attacks regarding deforestation launched against producers – whether countries or single companies – of certified palm oil have been repeatedly dismissed through scientific studies.

The most recent demonstration, and maybe the most influential as well, comes from the Global Forest Watch: according to its tracking, the rate of deforestation in Indonesia has decreased for the fifth year in a row. 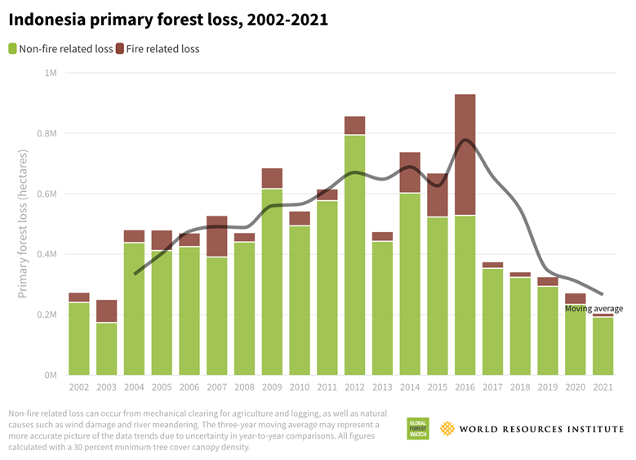 And if previous research weren’t enough, a new report commissioned by WWF-US and the Global Environment Facility to a dozen of European, Indonesian and Canadian researchers, titled “Slowing deforestation in Indonesia follows declining oil palm expansion and lower oil prices”, comes in handy.

The study presents an annual series showing the expansion of industrial and smallholder plantations, as well as the loss of forested areas. As the authors explain, this comes after a number of similar studies have been carried out in the past, seeking to track the link between the growth of the oil palm industry and deforestation through the years.

Indeed, a previous analysis estimated that between 2001 and 2016, industrial oil palm plantations caused about 23% of total deforestation on a national level. However, taking a longer timeframe, between 1975 and 2015, a regional study estimated that within the Kalimatan area (Indonesian Borneo), the industry caused only 15% of deforestation. When compared, these studies reveal that the impact of oil palm on forested land varies on a geographical and temporal basis. Other, more recent studies, have also shown that industrial expansion and land use change have been slowing down.

Indeed, the WWF-GEF analysis reveals that the forested area has shrunk by 11% between 2001 and 2019, with an average annual loss of 0.51Mha (milihectares). Over the same 18-year period, Indonesia gained 8.48Mha of palm plantations (6.19 Mha of industrial land, 2.28Mha of smallholder land), reaching a total surface area of 16.24Mha in 2019, 64% of which is industrial and the remaining 35% smallholder-owned.

Both industrial and smallholder plantations follow similar trends: the expansion and conversion of forests to palm plantations have rapidly increased in the year 2000s, peaking in 2009 and 2012, and consistently declining afterwards. In 2019, plantation expansion returned to pre-2004 levels.

Why did plantation expansion slow down after 2012?

Let’s take a look at oil prices: the market value of crude palm oil changed in the timeframe analysed, with peaks in 2008 and 2011. As can be observed in the graph below, the authors have observed a positive correlation between annual price change and plantation expansion, as well as between price change and forest loss. A decrease of 1% in certified palm oil price is associated with a 1.08% reduction in new industrial plantations and a 0.68% reduction in forest loss.

The correlation suggests that finance played a relevant role. The Chinese and India economies flourished between 2000 and 2011, and the price of certified palm oil increased fourfold. Between 2011 and 2012, the economic growth of China and India slowed down, and the market was not able to absorb supply, with a subsequent decrease in price.

The peak is partly due to the fires that affected the Kalimatan region following the droughts caused by El Niño in late 2015. Furthermore, many of the remaining forested areas are protected or inaccessibly by industries, and a community-based management of the land, supported by a solid legal ground for land reclamation, has further reduced industries’ access. Lastly, more and more consumers wish to consume products they believe to be ethical, meaning those that are not linked to deforestation, and more and more industries are committing to zero-deforestation objectives.

Let’s look at the bright side: deforestation rate has considerably reduced in the last five years. Several steps have been taken to protects forests, including through local community-based land management. Transparency also improved, thanks to better real-time monitoring devices and to sustainability certification criteria.