HomeNewsSenza categoriaNutriscore: thumbs down from the European Commission for the traffic light labelling system

Nutriscore: thumbs down from the European Commission for the traffic light labelling systemPRESS RELEASE 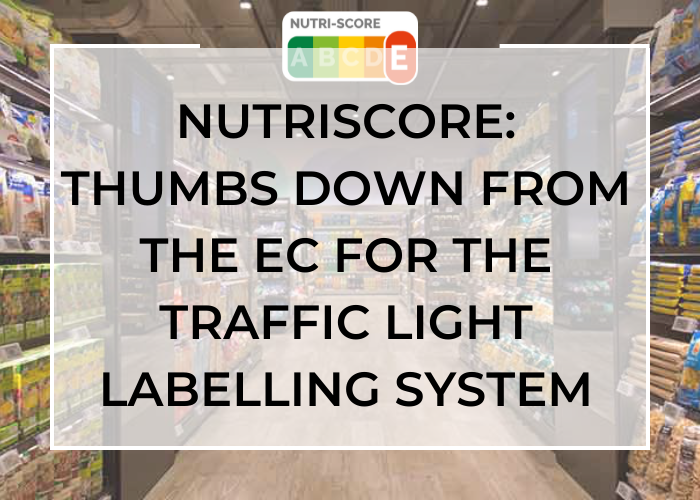 NUTRISCORE: THUMBS DOWN FROM THE EUROPEAN COMMISSION FOR THE TRAFFIC LIGHT LABELLING SYSTEM

New report from the Joint Research Centre. Paganini: “Science has declared it ineffective. The EU should be moving towards freedom for the consumer”

“The European Commission has finally repudiated the Nutriscore system.” This is the comment of Pietro Paganini on the new report drafted by the EU Joint Research Centre (JRC) on the inefficacy and lack of scientific grounding of the traffic light labelling system. “The new study confirms what the scientific community has always said: there is no data from real life experiences to support the supposed benefits of the Nutriscore system”.

With the updating of the survey of nutritional labelling systems, the JRC has observed that consumers, especially those on a low income, actually prefer simple, colour-based systems, because they offer a quick way to obtain information on the nutritional composition of foods when purchasing them. “But point 4 of the study’s conclusions is clear”, adds Paganini. “There may be a gap between the nutritional labelling systems consumers say they prefer and those that actually help them make informed decisions for better nutrition.”

Nutriscore is not only ineffective, it is also anachronistic. “New research results and new technological applications are guiding nutrition towards personalised diets”, Paganini explains. “The benefits of a diet depend on a large number of factors, linked to the individual: lifestyle, genetics, social relations, etc.  This prospect, together with technological evolution, allows us to draw up diets that can be personalised instantly according to who we are and how we feel during a particular period of our life, while Nutriscore sees us as all the same and assumes we react in the same way to ingredients that are supposedly dangerous. On saturated fats, by the way, science is divided, and is reconsidering the positions previously adopted”.

In the past, our Scientific Committee had already pointed out that the presumed suitability of Nutriscore for improving consumers’ diet derived from works based on mathematical models applied a posteriori to existing epidemiological data, and today the JRC has confirmed that there is no real-life evidence to support its suitability. Despite the frequent attempts on the part of its supporters to credit it with a scientific basis, there are no studies able to demonstrate a cause-and-effect dynamic, or to confirm that the use of Nutriscore can have positive consequences for consumers’ health.

“At this point, it’s important to understand why the international press continues to spread incorrect information, and why this is not being refuted by the Commission”.

In the light of this misunderstanding between the institutions and the media, we hope for a further effort from the European Union in defence of freedom of choice for the consumer. “With Nutriscore, the State’s scientists once again claim to know what is right and wrong for each one of us. The Commission should be concerning itself with the benefits and the risks linked to personalised diets: it’s not difficult to imagine the consequences of an algorithm drawn up specifically for me that claims to be able to establish what I need at a certain point in terms of energy, using software and digital devices. In whose hands is the algorithm? Who do the data belong to? Who controls them? Is there a risk of commercial interests influencing my diet? These are questions lawmakers should ask themselves before applying a system that makes a clear communicative impact, but is approximative from a scientific point of view.”