PRESS RELEASE – The European scientific community against NutriscoreEVENT "SCIENCE VS IDEOLOGY: BEYOND NUTRISCORE" 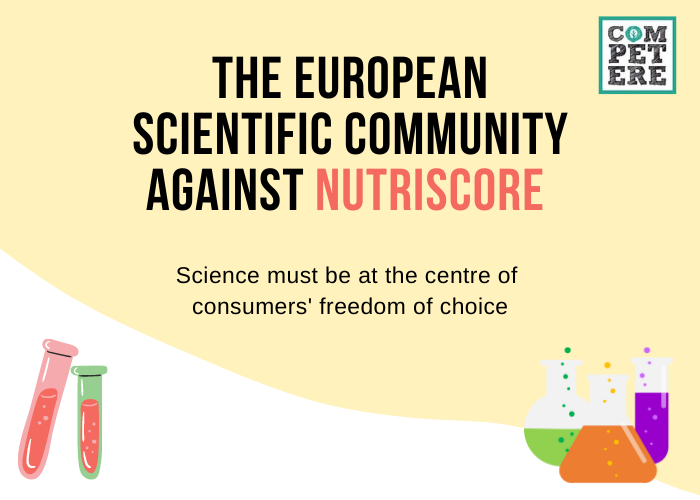 Read it in Italian

THE EUROPEAN SCIENTIFIC COMMUNITY AGAINST NUTRISCORE

IT HAS NO OBJECTIVE BASIS, SCIENCE MUST BE AT THE CENTER OF CONSUMERS’ FREEDOM AND WELLBEING

Milan, November 16, 2021 – Reaffirming the anti-scientific nature of NutriScore, demonstrating the lack of scientific basis of the arguments supporting the measure and stressing consolidated studies that have always highlighted the weaknesses and threats of the NutriScore.

This is the mission launched during the conference “Science Vs Ideology – Beyond NutriScore” organized by Competere.eu, the European think tank and promoter of the only Italian platform for a scientific discussion on sustainable nutrition, which saw the participation of two prestigious scientists, Dr. Francesco Visioli from the University of Padova and Dr. Ramon Estruch, from the University of Barcelona.

The discussion showed how the NutriScore system is based on non-scientific elements, thus jeopardizing the ability of consumers to identify the correct diet to follow and their freedom of choice.

Why is NutriScore not scientifically valid? These are some of the main points that have emerged:

“NutriScore is not based on the results of scientific studies. It contains many flaws as it mixes energy, food and nutrients, it does not evaluate the quality of proteins, fat or carbohydrates and it does not highlight positive aspects such as high density of nutrients – mineral and vitamins – or content in bioactive compounds. Lastly, it does not take into account the degree of processing” – affirmed Dr. Ramon Estruch from the University of Barcelona.

“NutriScore presents an approach that goes against the indications of the vast majority of nutritionists. It focuses on individual foods and nutrients instead of the concept of diet; it disregards the concept of portions, preferring the indication of values per 100g; it does not help the consumer to understand which nutrients can be positive or negative. In this way olive oil gets a lower score than a soft drink” – said Dr. Francesco Visioli from the University of Padova.

The information provided by NutriScore is also misleading for consumers, heavily restricting their ability to choose. The NutriScore judges foods without providing any direct nutritional information (composition, nutrient content, etc.): the consumer cannot know why a food is classified as positive or negative. In addition, people with special dietary needs have no support from NutriScore.

According to some research, consumers in seven European countries (France, Germany, Greece, Italy, Portugal, Romania, and Spain) prefer the detailed Nutrinform Battery labeling system over NutriScore. (Mazzù et al., 2020, 2021) It is demonstrated that many consumers are suspicious of summary labels that do not show nutritional information, (Grunert and Wills, 2007; Hodgkins et al., 2012) preferring instead labels that are intended to educate, stimulate critical thinking and understanding of individual needs.

“Competere represents the only Italian subject and one of the few in Europe to promote a scientific, rigorous and super partes debate on NutriScore, acting as a driving force and collector of scientific contributions generated by the most prestigious European scholars. Today we have once again highlighted the lack of scientific basis of the NutriScore, as it only aims to arbitrarily condemn or promote foods while it does not educate the consumer, forcing him towards choices based on incomprehensible and non-transparent parameters. NutriScore, in addition to generating paradoxical classifications of foods that are symbols of the Mediterranean Diet – scientifically considered as among the healthiest nutritional regimes in the world – represents a totally unscientific measure that jeopardizes not only a priceless social and economic heritage such as the Made in Italy agri-food, but also the wellbeing of European citizens” – affirms Pietro Paganini, Founder and President of Competere – Policies for Sustainable Development.