The impact of cryptocurrencies, the digital euro hypothesis, the role of the European Central Bank (ECB) and cashless. These are the main topics of the online conference that was held on Thursday 25 February on the Zoom platform. The event was attended by Hans-Olaf Henkel member of the European Parliament in the ECR group, Martin Gundinger Senior Research Fellow at the Austrian Economics Center, Thorsten Polleit Chief Economist of Degussa and the president of Competere Pietro Paganini as moderator.

In beginning Hans-Olaf Henkel explained how there is an almost sexual attraction for cryptocurrencies that pushes citizens to approach bitcoins and the like, but it must always be remembered that this is a safe technology but not without risk. “Proof of this is the great loss suffered by Elon Musk” said Henkel. “The use of cashless was already widespread before it was encouraged by the ECB and its spread was amplified by the fear of the coronavirus”, concluded Hans-Olaf Henkel.

Martin Gundinger instead explained the mechanism behind cryptocurrencies: the blockchain. Originally, the concept of cryptocurrencies was born in embryo as early as the 1980s but only later, with the birth of bitcoins, did it come to light in ’10s. An important push towards the use of bitcoins was linked to the wikileaks website”, explained Gundinger. The risks of cryptocurrency payments were highlighted by Thorsten Polleit. “The ECB should abandon the digital euro hypothesis”, Polleit continued. For him in this way “ECB would acquire even more power and this would limit individual freedom”. “In a truly free society, citizens should always be able to choose between cash and and card” concluded Polleit.

Martin Gundinger is Senior Research Fellow at the Austrian Economics Center. Since 2010 he focuses on the technical and economic aspects of crypto currencies

Hans-Olaf Henkel is a Member of the European Parliament since 2014. Before that he was President of the Bundesvereinigung der Deutschen Industrie (BDI) and from 2001 to 2005 President of the Leibniz Association, and held various supervisory board mandates

Thorsten Polleit is Chief Economist of Degussa, Europe’s largest precious metal trading house. Before that he worked for more than 15 years in the international investment banking business. 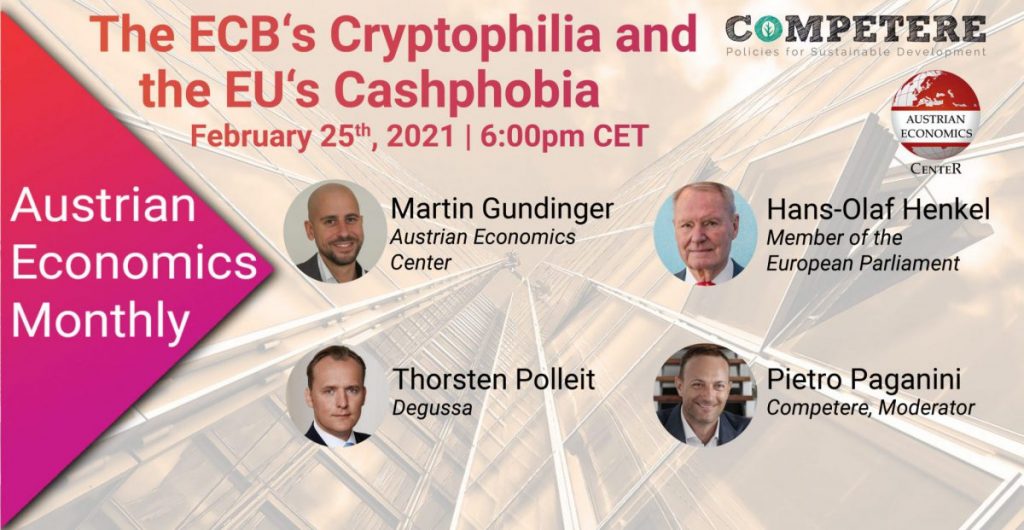 He joined the Austrian Economics Center in 2016 as a Research Fellow. In addition to his research tasks, he is also maintaining the websites of the AEC, Free Market Road Show, and European Resource Bank. He is also a Research Fellow at the Hayek Institute.

He is Professor of Business Administration at the University of Mannheim. He was President of IBM Europe, Middle East and Africa and President of the Association of German Industries (1995-2000). From 2001 to November 2005 he held the position of President of the Leibniz Association, an organization operating in many sectors such as education, science and research. Currently he was elected at the European Parliament with the European Conservatives and Reformists Group.

Since 2012, Thorsten Polleit is Chief Economist of Degussa, Europe’s largest precious metal trading house. Before that he worked for more than 15 year in the international investment banking business. Since 2014 Thorsten Polleit is Honorary Professor of Economics at the University of Bayreuth. He is also president of the Ludwig von Mises Institute Deutschland, founded in 2012, and a Fellow at the Ludwig von Mises Institute, Auburn, US Alabama. In 2012 Thorsten Polleit received The O.P. Alford III Prize in Political Economy. He also acts as an investment advisor. His lastest books are „Mit Geld zur Weltherrschaft“ (2020, Finanzbuch Verlag), “Ludwig von Mises – der kompromisslose Liberale” (2018, F.A.Z.-Verlag) and “Vom intelligenten Investieren” (2018, FinanzbuchVerlag).