Food: every gram wasted is one too manyBy Benedetta Annicchiarico

This is the second part of a short series on food waste and sustainability. Read part one here.

Italy is among the world leaders in food waste prevention and food recycling, but we should not be complacent. Achieving a truly sustainable food system requires even more effort

31kg: this is the amount of food wasted each year by each individual in Italy. 595 grams per week, for a total value of over €7 billion. The results of the 2022 report by Waste Watcher International, published in occasion of the 9th National Day for Food Waste Prevention on February 5th, show an uptick in food waste that goes against the downward trend witnessed in the past two years. These are significant numbers in absolute terms – one could rightfully say that every gram wasted is one too many – but when taken into European and global context, they tell the story of a country that is particularly sensitive to responsible consumption. Among the eight countries analyzed by Waste Watcher – USA, Canada, United Kingdom, Spain, Germany, Russia and Italy – the latter shows the least waste. Brits, Canadians and Germans waste double the amount we do, Americans triple it.

Our attention to the issue of food sustainability is also evident in the data regarding waste sorting and recycling. Indeed, transforming organic waste into fertilizers and biogas can have a mitigating effect on the economic and environmental damage caused by food excess. According to the 2020 Urban Waste Report by ISPRA (Higher Institute for Environmental Protection and Research), 43% of all urban waste subjected to recycling was organic, by far the largest share.

Back in 2019 Italy was already third in Europe for the highest share of recycled organic waste. More than 6 billion tons of food were put through the recycling facilities, a number in steady rise since 2010 and confirmed in 2020, despite the shock on daily life brought about by the pandemic.

For once, we can give ourselves a pat on the back. But we should not be complacent: food excess is unacceptable in a global food system that wishes to be environmentally, economically, and socially sustainable. The importance of waste sorting and recycling is evident through one of the many waste emergencies in this country. The objective then is twofold: bring food waste to zero and food recycling to the level of the Emilia-Romagna region, if not above it (see graph below). The former depends on domestic initiatives, many of them already in place in many Italian households, like weekly meal planning according to the expiration dates of food already in stock, or the purchase of appropriately sized portions. Many supermarket chains have increased their offer of portions for one or two-person households, adapting to the demographic trends that are affecting many areas of the country. 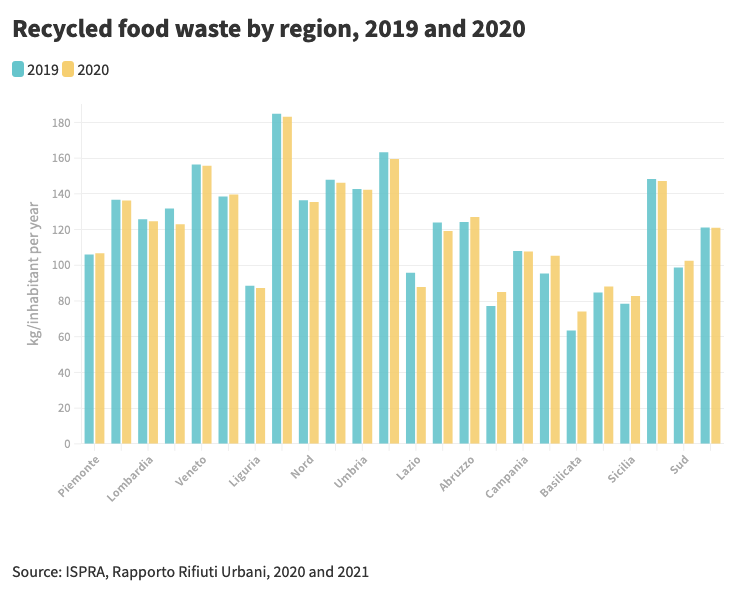 On the other hand, the diffusion and implementation of waste sorting requires structural planning, including the creation of new treatment plans for composting as well as aerobic and anaerobic treatment, which produce fertilizers and biogas respectively. The South of Italy currently has about 62 composting plants and 7 anaerobic treatment plants, compared to the North’s 173 and 47, thus provoking a deficit in waste absorption ability that reaches 700% in the region of Campania (CIC, 2019). Awareness is also key and must be achieved through a system of sanctions and incentives, as well as through campaigns that stress the economic and environmental damage of unsorted waste – a strategy that already finds the support of 80% of Italians.